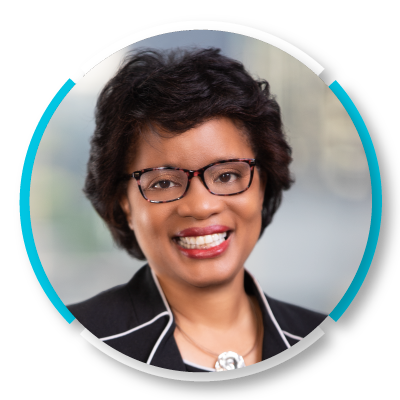 Stephanie Wiggins was named chief executive officer of Metrolink by a unanimous vote of the board of directors in December 2018. Wiggins assumed leadership in January 2019 and leads the 275-employee strong commuter railroad with a budget of $793 million.
As CEO, Wiggins directs an agency that operates a commuter rail network on seven routes across a six-county, 538 route-mile system. Wiggins has held high-level positions at three of the five-member agencies that comprise Metrolink and is well-known as a customer -focused leader who finds solutions from a regional perspective.
Wiggins’ vision for the agency is to create value and exceed expectations by prioritizing a customer-first orientation with three pillars to provide an outstanding customer experience: safety and security, an integrated system, and modernizing business practices.
Prior to leading Metrolink, Wiggins was Deputy CEO of the Los Angeles County Metropolitan Transportation Authority (LA Metro) where she assisted the CEO in providing leadership and formulating and achieving strategic public transportation objectives, including the passage of Measure M, a half-cent sales tax approved by 71 percent of voters in LA County. During her tenure at LA Metro, Stephanie also served as the Executive Director of Vendor/Contract Management, where she implemented procurement streamlining initiatives and greatly expanded Metro’s utilization of small and historically underutilized businesses. Prior to that role, Stephanie was the Executive Officer and Project Director of the Congestion Reduction/ExpressLanes Program where she launched the first high occupancy toll lanes in LA County, the I-10 and I-110 Express Lanes, which improved travel times and travel reliability on two of the County’s most congested freeway corridors.
Prior to Metro, she served as Regional Programs Director for the Riverside County Transportation Commission (RCTC) and oversaw transit, commuter rail, rideshare, goods movement and rail capital projects.
Wiggins began her career in transportation when she accepted a temporary assignment at the San Bernardino County Transportation Authority and fell in love with the mission of the agency. The six-month temporary assignment turned into more than four years. She then accepted a policy analyst position with the RCTC where she worked for an additional nine and a half years in management and senior management roles.
Feeling the need for personal and academic growth, Wiggins earned a Master of Business Administration from the USC Marshall School of Business in 2007. She received her Bachelor of Arts degree in Business Administration from Whittier College in 1992.
Wiggins is a self-proclaimed “military brat” whose father made his career in the Air Force. She credits her experience moving from base to base and country to country as a child for teaching her the importance of diversity.
Wiggins is the founding president of the Inland Empire Chapter of Women’s Transportation Seminar. She is the recipient of many awards including the Conference of Minority Transportation Officials 2018 Women Who Move the Nation Award. She is a Board Member of the Los Angeles Chapter of Friends of the Children, the LA Division of the American Heart Association, and an Advisory Board Member for the UCLA Lewis Center.